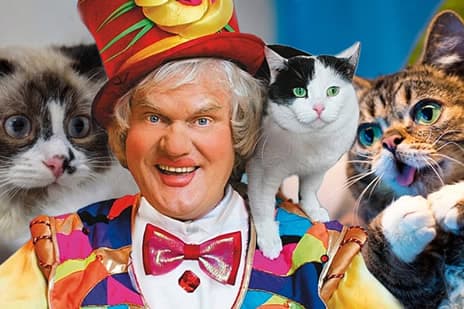 A famous artist Yuri Kuklachev claims that cats taught him many important things in his life, including kindness – a quality that is the basis of everything as it saves us from failures, loneliness and illnesses.

Cats are majestic and self-dependent. Why do they unquestioningly fulfill the wishes of their trainer? Even Yury Kuklachev does not know about it. His cats do sarto-mortals, stand on their front paws, ride light toy bicycles, play football ... And the most talented ones even dance the pas de deux from the ballet The Nutcracker. Yes, his cats do everything he asks them to do!


Kuklachev does not like the word "trainer". He prefers the words ‘love’ and ‘kindness.’ He considers kindness to be positive energy, and ‘love’ is the most important word in the universe. Everybody knows about love from the ancient Bible times. But nowadays it sounds more seldom. Perhaps this fact led Kuklachev to the idea to open the "School of Kindness". And he opened it in Moscow with the support of the Department of Education.

Becoming the rector of the School of Kindness, Kuklachev began to publish small textbooks with pictures, to hold contests of children's poems and drawings and to arrange charity concerts in orphanages. He wrote in his first textbook that he had performed with cats for many years and understood that Kindness was a colossal energy with amazing properties. When you give it to someone, you do not lose it, but you get it. Kindness is a special feeling. It is not seen by eyes and cannot be tested by any instruments. It manifests itself only in deeds actions. According to Kuklachev's teaching books, "lessons of kindness" are held in several Moscow schools.

Kuklachev started his career meeting two homeless kittens, whom he picked up in the street. He brought them home, washed them sick eyes with tea, cured them and made them his pets.

Many years ago people noticed that the secret of creativity should be looked for in love. Kuklachev had cured the cats and had found a common language with them. After that he started to think of his own can theatre. His first feline actors were Strelka and Romashka. They were the first cats that acted in a circus.

It was more than 30 years ago. From that time until now, Kuklachev's cats continue to amaze the world. Have you ever seen a cat playing chess? Kuklachev’s cats play!

New York and Tokyo offered Yuri Kuklachev carte blanche in the opening of branches of the "Cat Theater" in the US and Japan. All circus and theatrical international competitions awarded him their highest awards and diplomas "For humane treatment of animals" and "For careful treatment of flora and fauna". Today, the whole cabinet of Kuklachev in the "Theater of Cats" is filled with these awards.

But the director of the theatre is rarely present in his office. He and his actors are endlessly touring the cities and towns of the planet. A curious case happened to them on tour in the UK. English customs officers did not like the medical documents about cat vaccination and prescribed two month quarantine to Kuklachev's actors. But the tickets had been sold for a long ago, and the English public did not want to be disappointed. What did Kuklachev do? He left his actors at the customs and went to London. There he found some ordinary cats, trained them quickly and conducted the planned concerts successfully. In his Moscow office now there is another prize. It is from the English Society for the Protection of Animals and the Environment.